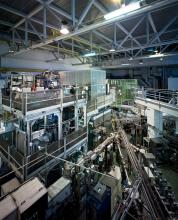 The feasibility of on-line production of short-lived radioactive isotopes was demonstrated already in 1951 by O. Kofoed Hansen and K.-O. Nielsen. They performed experiments on short-lived isotopes of noble gas elements that were produced by connecting a target, irradiated by protons, directly to an isotope separator.
CERN's ISOLDE, an acronym for Isotope Separator On Line, went into operation again in 1992, after a major upgrading that has placed the facility in a new building complex fed by a 1 GeV proton beam from the injector synchrotron, called the PS Booster. Hence, ISOLDE is now firmly integrated into the accelerator architecture of CERN.

ISOLDE was originally proposed at the 600 MeV Proton Synchro-Cyclotron in 1964. The first experiments started there in 1967. ISOLDE underwent several upgrades until it was finally moved to the PSB in 1992. Amongst the existing facilities, ISOLDE presently offers worldwide a wide diversity of radioactive isotopes, and the installation of a post-accelerator at ISOLDE (REX-ISOLDE) has opened new fields of research with radioactive ion beams of higher energies. In this respect the facility is complementary to other European radioactive ion beam accelerators such as SPIRAL (GANIL, France) and GSI (Darmstadt, Germany), and provides a wider range of intense accelerated ions compared to HRIBF (Oak Ridge, USA) and ISAC (Vancouver, Canada).

At ISOLDE, radioactive nuclides are produced via spallation, fission, or fragmentation reactions in a thick target, irradiated with a proton beam from the PSB at an energy of 1.4 GeV and an intensity up to 2 mA. The target and ion source are fast physico-chemical devices. The volatile nuclear reaction products are released from the high temperature target into an ion source via chemically selective processes and are extracted as a radioactive ion beam, which in many cases reaches the highest intensities available worldwide. Laser ionisation for selected chemical elements allows for further selection and in some cases can provide a beam prepared in a particular isomeric state. This unique production device is coupled to powerful mass separators from which are extracted high intensity radioactive beams of high isotopic and often isobaric purity. More than 600 isotopes with half-lives down to milliseconds of almost 70 elements (Z=2 to 88) have been produced at intensities up to 1011 atoms per mA proton beam.

ISOLDE itself is a multidisciplinary activity but users further benefit from free interplay of scientific and technological transfer between the infrastructure and the rest of CERN.